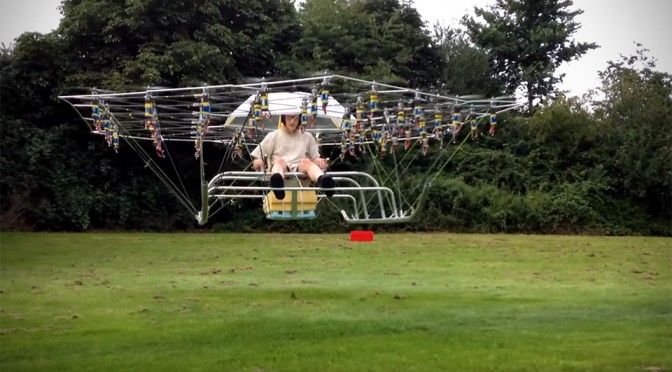 Whats the next step up from a UAV drone? A Manned Drone.

As there are not many commercially available or affordable manned drones, what do you do?

That’s right you build your own manned drone.

Drones are usually known as non-piloted aircraft or UAVs (Unmanned Aerial Vehicles). Controlled remotely by the pilot. Seen as an innocent pastime by some, or an annoying invasion to others!

It was only a matter of time before somebody took things a little further! Making a drone that they could actually fly in. Just build it and fly it, no pilots licence needed! Although, by the looks of it they are not going to get that high from the ground.

You may have seen some on YouTube. Some of them are ingenious and some are damn scary looking and you would have to be mighty brave or a little crazy to take to the skies in some of these flying machines!

The Good, The Bad and the Ugly

Let’s start with the Good. This not only looks impressive it looks like it flies well, although the pilot didn’t seem brave enough to take it to great heights.

The Bad. Ok its a bit harsh calling it bad. The man has put a lot of work, sweat, and beers into this flying machine. With a bit of tweaking here and there, it could well be the future of manned drone flight.

At 3mins 6 sec, watch the car in the background as he comes back for another look….

You have got to give the man credit for his ingenuity.

And the Ugly. Have to say though it does fly, well hover. The only problem is the pilot or crash test dummy has no controls.

He is just the passenger in this little manned drone. Look at his facilities for testing. In his own backyard, with all sorts of objects for the pilot to try and avoid and practice his flying skills.

You will see fences, overhead cables, buildings and amazingly he managed to avoid it all 🙂

What are your thoughts on these homemade Manned Drones? Genious or plain Crazy!

Leave any comments or suggestions below!