What are Drone Racers

Drone racers, basically race drones around a specifically made circuit at speed in excess of 120mph.

Now, these are not your ordinary drones. They don’t have any stabilisation built in and no fancy GPS sensors helping it.

The control of these speedy drones is all in the hands of the highly skilled drone racer. They

They wear a set of goggles ranging in price anywhere from €50 to over €500. Obviously, the higher priced goggles offer much better features and improved picture quality.

How is all this done?

The drone will have a camera mounted in its nose. Video footage is transmitted back to the goggles by radio waves.

This is all linked together to the drone, remote control and goggles. Drone racing started off as an amateur sport back in 2014 and has gone on to official racing leagues sprouting up all around the globe.

Drone racing started off as an amateur sport back in 2014 and has gone on to official racing leagues sprouting up all around the globe. 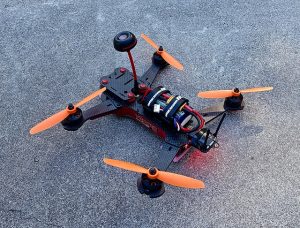 The World Drone Grand Prix held in Dubai had a 1st prize of $1 US dollars. Dubai built a massive

Dubai built a massive purpose built track for this event and Drone racers from all over the world came here to compete.

The technology is still fairly new and is always been improved and updated, which will only lead to quicker drones and more sophisticated circuits.

Drone racers are supplied with these drones so that there is no advantage to having a quicker or more agile drone, this keeps the drone races extremely close and competitive.

We use cookies to ensure that we give you the best experience on our website. If you continue to use this site we will assume that you are happy with it.Ok